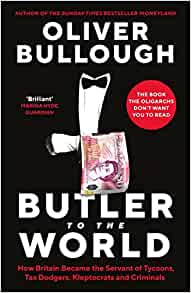 Books » Butler to the World

Butler to the World

Decency, fair play and honesty, values that make up the British way of life. Unfortunately, the idea doesn’t always sit well with reality. Journalist Oliver Bullough takes a deep-down dive into the murky world of money laundering revealing how lawyers, accountants, and bankers allowed the dirty money of kleptocrats and criminals to swirl through Britain’s political, legal, and financial establishment. Where was the government when all this was happening? Looking the other way of course!

 5/5
Reviewed By Reviewed By Juliette Foster
A brilliant expose of how Britain became the laundering gateway for a global criminal elite of kleptocratic leaders, tax dodgers and thieves.

THE PRICE OF LOOKING THE OTHER WAY

Not a day goes by without media reports detailing the latest seizure of multi-billion-dollar assets owned by oligarchs with links to the Russian president Vladimir Putin. Since February 24th, when Putin launched his invasion of Ukraine, the global authorities have appropriated real estate, expensive works of art and at least 13 super yachts (with a total value of nearly $2.5 billion), including a $90 million vessel belonging to Viktor Vekselberg founder and president of the Russian conglomerate Renova Group.

It’s an eyewatering haul but still a tip off the iceberg when you consider that oligarchs have been successfully hiding their assets for years while using/abusing legal systems to silence any awkward questions about the true source of their wealth. For every yacht or mansion seized in government raids, there are plenty more beyond the reach of officials. The bigger question is how these so-called businessmen were able to spend – or should I say – launder their wealth in plain sight of some of the very governments who are now sanctioning them?

Butler to the World is Oliver Bullough’s coruscating account of how the British government looked the other way as a network of highly paid lawyers, accountants, investment bankers, business consultants and PR experts bent the rules to facilitate the financial needs of kleptocratic leaders, crooked tycoons, industrial scale tax dodgers and even drug barons. Heads should be hanging in shame at these findings and their ramifications for democracy, but in the kingdom of the arrogant, stratospherically wealthy there is no such thing as shame!

Britain’s role as a facilitator, or butler, grew from its lost prestige as a military superpower after the 1956 Suez crisis. Although the operation to retake the canal ended in failure, it did pave the way for the country to reinvent itself as an offshore financial center just as the sun was beginning to set on its empire. Key to the process was the accidental creation of the Eurodollar, “one of the most consequential financial tools of the twentieth century”, which allowed banks to raise limitless amounts of cash while sidestepping restrictions by the US Federal Reserve (America’s central bank) on overseas Dollar loans. The concept gained traction over the decades and made the City (London’s financial district) a good place to do business. With the later addition of light touch bank regulation and limp-wristed rules around money laundering and compliance, Britain gained a reputation as a haven for criminals to park their ill-gotten gains with few questions asked. The rest as they say is history!

Bullough does a splendid job explaining how Britain’s former colonial territories were inserted into what is now a complex, extensive laundering architecture, and how the flow of unfettered money has bled its way into political life. A 2020 report by the Parliamentary Intelligence and Security Committee on Russian influence in the UK, revealed how money from Russia allied businessmen was accepted with very little due diligence being carried out! Britain has been welcoming oligarchs to its shores since the 1990s and politicians have been hopelessly dazzled by their off the scale spending, lavish hospitality and outsize political donations (in 2014 the wife of a former Russian minister gave over $200,00 to the Conservative Party in return for playing a tennis match against the man who would later become Prime Minister: Boris Johnson). Splashing the cash buys influential friends and even a place at the top table of government. Since 2020 Yevgeny Lebedev, son of a Russian billionaire and former KGB officer, has sat as a crossbench life peer in the House of Lords. Boris Johnson, who nominated him for a peerage despite the concerns of security experts, had reportedly attended caviar and vodka parties hosted by both the father and son during the 2010s. It is strangely ironic that when the former Prime Minister Theresa May stood up in Parliament and said “There is no place for these people, or their money in our country”, she forgot to mention that the horse had bolted from the stable a long time ago!

It’s impossible not to feel anger, disgust and incomprehensibility after reading Butler to the World. How can a minority of people get away with living the high life on stolen money that should be invested in vulnerable, impoverished communities? Why was the British government slow to act when journalists and financial investigators exposed the systemic weaknesses that enabled the abuses? And where does this self inflicted debacle leave Britain’s reputation for decency, honesty, and fair play? There is no easy answer and although sanctions have been imposed on Vladimir Putin’s associates in response to events in Ukraine, I can’t help wondering if they are genuinely effective.

And as for the “butler”, well he’s keeping his head down until he can quietly pick up from where he left off with his duties!