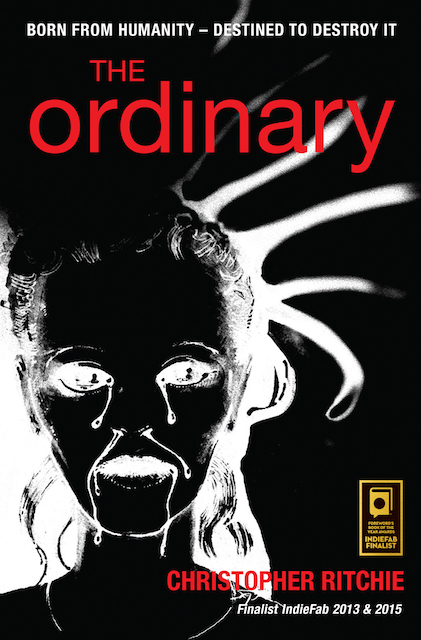 Who are the Ordinary and what is the flaw in humanity that makes it possible for them to survive? In the award winning sequel to House of Pigs, author Christopher Ritchie uses the benignity of the English suburbs as the backdrop from where the Ordinary hatches an evil plan to destroy mankind. Behind the neatly clipped lawns, lace edged curtains and pebble dashed house fronts is a world of rape, murder, pornography and teenage abductions.

I’m a huge fan of Christopher Ritchie, the new “one to watch” name on the Indie author circuit. His dark, subversive writing is underpinned with flashes of gallows humour, intense, imagery and a narrative that runs with the speed of a bullet leaving a gun. In Ritchie’s imagination, no subject – however taboo – is off limits which explains why The Ordinary, the much-anticipated sequel to House of Pigs, is already being hailed as a classic of its genre. Fusing horror with psychology and new age religion, this is a book that repels as much as it fascinates. It’s no surprise that Ritchie picked up silver honours at the 2015 Foreword Reviews of IndieFab Awards.

The Ordinary is the silent unseen force that ruthlessly exploits humanity’s moral flaws as it drifts towards a prophetic end game. Every weakness, no matter how slight, is an opening on which to feed and the Ordinary is good at finding the gaps.

Porn baron George Lazarou, the brains behind the SkinFlix adult entertainment service, is so amoral that he would happily put his daughter in front of a camera to make a profit: pensioner misfit Stanley is obsessed with underage teenage girls who he imprisons as trophy “brides” in his suburban bolt hole: Jock and Bleach, his low life “errand boys”, are paid to find the flesh. They know that beneath the mildness of his manners, Stanley is a man not to be messed with, yet they can live with that because his pockets are deep. The arrangement between this gruesome trio works well until the day that Bleach accidentally kills one of the girls, triggering a murder inquiry and a terrifying chain of events that will pitch mankind’s survival against the Ordinary’s destructive powers. Lives will be lost, others saved while loyalties will be tested beyond their natural limits.

One of the few rays of hope in the bleakness are Jez, the laid-back pot smoking son of a retired police officer, and his resourceful Polish girlfriend Maria. She is the rare prize of goodness that slips through the Ordinary’s poisonous net although the failure to claim her is not enough to deter them from their mission of world domination. It starts with a massive coastal contamination (wrongly assumed to be an oil spill), which then mutates into a slimy, tendrilled network of flesh-eating creatures who rampage their way through Europe, America, South Africa and the Brazilian favelas.

Every death is brutal and while Ritchie’s descriptions aren’t necessarily over the top, there’s enough detail to almost feel the sensation of being throttled or eviscerated. For the squeamish that makes for uncomfortable reading but then The Ordinary wasn’t written to be a “feel good” book. It’s a novel that confronts the idea of a morally decayed world via some depressingly familiar 21st century themes. Stanley’s child “brides” are euphemisms for the streams of anonymous women trafficked into domestic and sexual servitude: Jock and Bleach are the deliverymen for whom having a conscience isn’t a necessary part of the job: the porn baron has built his wealth on exploiting a mentally ill man, while encouraging naïve young women into believing that starring in sex movies gives them control over their bodies. Maybe the Ordinary are the payback humanity deserves!

The biblical overtones in this novel are striking though not overplayed and amidst the death, gore, and destruction lurk some genuine nuggets of ironic black humour. As the Ordinary run amok, Jez and Maria hide in a supermarket freezer with a handful of other survivors. It turns out to be a bad move when the group must decide whether to open the door and brave the consequences or freeze to death. A beef joint solves the problem!

The Ordinary is a novel with a tight structure, believable characters and a compelling storyline. What makes it especially chilling is Ritchie’s use of the benignity of the suburbs as his narrative backdrop. The manicured lawns, double glazed windows and pebble dashed house fronts will be familiar to most of his readers yet behind the flutter of white lace curtains horrifying acts of violence are being perpetrated.

The Ordinary is an uncompromising, thought provoking piece of writing that encourages us to think about the future and what it is that we want. Decency hangs by a thread in a hard, cynical world where pornography is mainstream, money is valued above self-respect while goodness hovers near the edge of extinction. Yet despite the gloom the novel never loses its underlying sense of optimism. Humanity cannot live without hope and the Ordinary will never survive as long as that truth remains intact.